995 (there are 20 cabins for disabled guests)
Expand

How the ship will look when it is finally at sea. 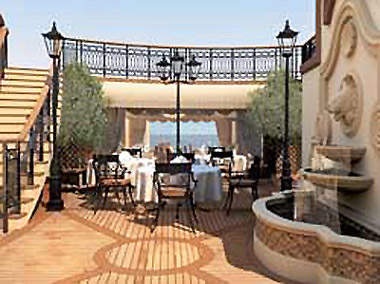 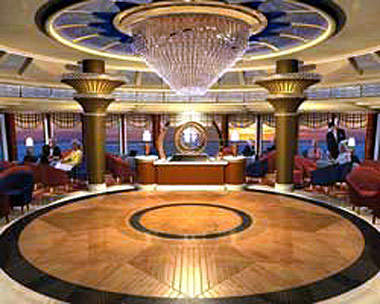 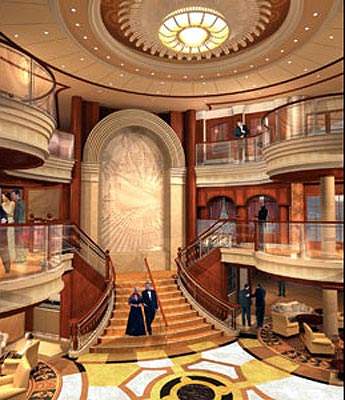 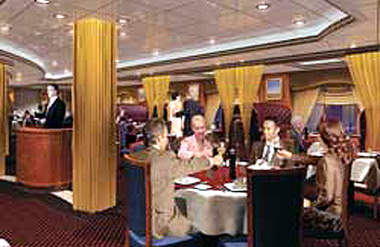 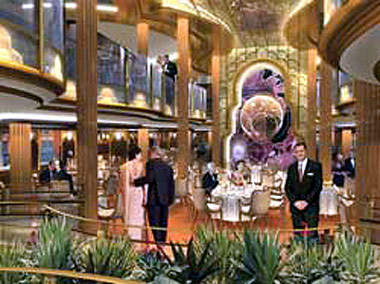 The MS Queen Victoria is a new 90,000t cruise ship under construction for the Cunard Line (Carnival Corporation & plc) at the Fincantieri ship yard in Marghera, near Venice, Italy. This is the first vessel that Cunard have had constructed in Italy. The ship was floated out from the construction dry dock on 15 January 2007.

Following completion of construction and fitting out, the Queen Victoria is due to make her maiden voyage on 11 December 2007. Tickets for this went on sale in April 2006 and were sold out within 24 hours. The ship will be registered as British and was ordered from Fincantieri in December 2004 in a deal worth some £270m.

The first section of Queen Victoria’s keel was lifted into position in May 2006. Six blocks made up each section, each complete with interior structure, cabling, and ducts and weighing in at 325t. Eighty such sections were used in the construction.

The fully completed hull and superstructure was floated out in January 2007, after the traditional christening ceremony of having a bottle of Prosecco smashed against the side by the chosen ‘Godmother’ Maureen Ryan (a Cunard employee who has served on all four of the Cunard Queens). The ceremony also included the traditional placing of coins under the main mast (a Euro and a gold Queen Victoria sovereign were fixed into position beneath the radar mast).

Queen Victoria will be propelled by two podded drive propulsors manufactured by ABB in Finland. Each AZIPOD has a fixed pitch propeller and the combination of varying the speed of the propellers and the ability to rotate the pods independently through 360 degrees provides steering and manoeuvrability. Each pod absorbs a maximum power of 17.6MW.

The ship will be capable of reaching approximately 23.7 knots (44km/h), but will cruise at 18 knots and will be able to carry 3,000t of heavy fuel and 150t of marine gas oil, consuming 10t per hour for maximum output.

“Tickets for the maiden voyage went on sale in April 2006 and were sold out within 24 hours.”

The ship will have three bow thrusters each absorbing a maximum power of 2.2MW. The Queen Victoria will have one pair of folding fin stabilisers and each fin will have an area of 20m².

There will be three high holding power anchors, each weighing just over 11t; two will be working anchors and the third is a spare mounted on the forward open space on deck 4.

The chain cable will have a diameter of 95mm (each link weighs around 82kgs) and the ship will carry a total of 742.5m (two and half times the ship’s length). The Bridge will be located on Deck 8, some 26m above sea level, where the deck officers will have an unobstructed view for navigation.

The bridge will have a span of 34m and will be equipped with the latest navigational aids that, together with the trained watch-keepers, will ensure a safe voyage for all passengers. In addition to communication equipment, the bridge will house displays for radar, sonar, speed and manoeuvring information. Close circuit television displays will be used to monitor all areas of the ship to maintain safety.

The Queen Victoria follows the same basic design as previous Vista class passenger vessels, although she is slightly longer and will adopt a distinctive Cunard interior style. The 90,000t ship will be the second largest Cunard ship ever built, following the Queen Mary 2.

However, it will be a cruise ship, not an ocean-going liner, and will also not have the RMS distinction as she will not carry Royal Mail. The ship will be a distinctively stylish new Cunard liner with traditional fitments such as wood panelling, mosaics, chandeliers and marbles.

The vessel will feature Cunard’s well known celebrated luxury Grills accommodation and dining with exclusive deck terraces and an al fresco dining option. The exterior design will closely resemble other Vista class ships built for the Holland America Line (another Carnival company) with a wrap-around promenade deck, private balconies, and a retractable glass magrodome over the mid-ship pool.

The Queen Victoria’s hull has been constructed to meet the demands of the Atlantic Ocean, with extra steel added to strengthen key decks and bulkheads, and additional reinforced, thicker bow plating.

The full complement will be 2,014 passengers and 900 British officers and crew. Captain Paul Wright was appointed master of the Queen Victoria in October 2006 and will take charge of the sea trials in 2007 prior to final delivery.

There has been criticism of Cunard from some quarters for naming the ship as a ‘Cunard Queen’ since the designation was previously reserved for flagships which were ocean liners. It is argued that the Queen Victoria is neither an ocean liner nor flagship, and has a mass-produced hull and superstructure. It has been suggested that the Queen Victoria should have adopted the name of a previous small Cunard ship such as Mauretania, or Aquitania.

The Queen Victoria will undertake her maiden voyage to northern Europe in December 2007. Following this there will be a short cruise to the Canary Islands and then the ship will begin her first world cruise, circumnavigating the globe in 107 days.

The first leg of the voyage will be a tandem crossing of the Atlantic with another of the famous Cunard ships the Queen Elizabeth 2 (QE2), to New York City, where they will both meet up with the Queen Mary 2. This significant event will mark the first time that three of the ‘Cunard Queens’ have been present in the same location at the same time. The Queen Victoria will continue to provide world cruises for the foreseeable future after the inaugural cruise.

The ship’s public rooms are predominantly arranged along Deck 2 and Deck 3. There is no central circulation access, the main corridors being to the starboard side, with the public rooms mostly along the port side. Deck 1, the lowest passenger deck, holds the lowest level of a three storey lobby, as well as the Royal Court theatre. On Deck 2 is the mid-level of the Royal Court theatre (seats 830 and has boxes), casino, Golden Lion Pub, Queen’s Room, Todd English à la carte restaurant, Chart Room bar, and the lower level of both the library and Britannia restaurant.

The topmost level of the theatre, Royal Arcade, Midships Lounge, and upper level of the library (which has 6,000 books) and dining room are all on Deck 3, along with a wrap-around exterior promenade. The decks above these contain mostly passenger cabins until Deck 9 on which can be found the Cunard Royal Spa and Fitness Centre, Winter Garden lounge, Lido Restaurant (450 guest seating), and two outdoor pools. On Deck 10 are the Commodore Club and Hemispheres night club.

“There has been criticism of Cunard from some quarters for naming the ship as a ‘Cunard Queen’ since the designation was previously reserved for ocean liners.”

The Queen’s Grill and Princess Grill, along with their attached lounge and an open courtyard between are situated on deck 11. Cunard are following their familiar practice of separating passengers into different restaurants based on the price of the cabin they booked (the Britannia {900 seats} as ‘standard’ for regular cabins, the Princess Grill {130 seats} as ‘middle’ for those in junior suites, and the Queen’s Grill {120 seats} as ‘superior’ for deluxe suite occupants) although all other public rooms are used by all passengers equally.

There are other restaurants such as the Todd English (Mediterranean cuisine) on deck 2, the Café Corinthia on deck 2, and the hamburger and salad bar on deck 9 for a change to the passengers’ dining experience.

The ship’s theatre is the first to have private boxes. There is also a Winter Garden lounge with a retractable glass roof and water fountain, and a two-storey library with a connecting spiral staircase. 86% of staterooms are outside and 71% of staterooms will feature balconies. The ship also has 10,000ft² of open deck for passengers to stroll on.