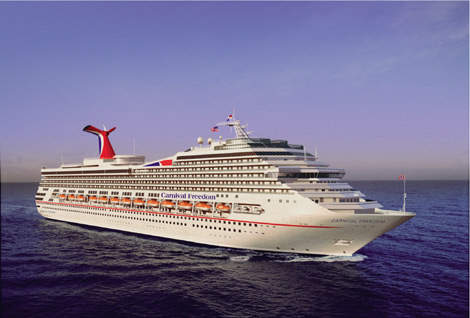 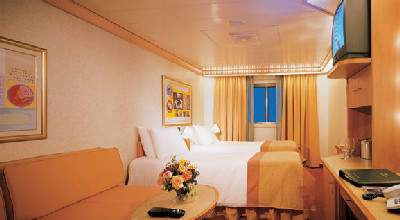 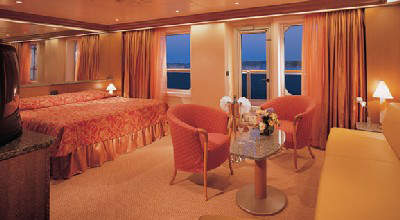 Over 80% of the state rooms have balconies. 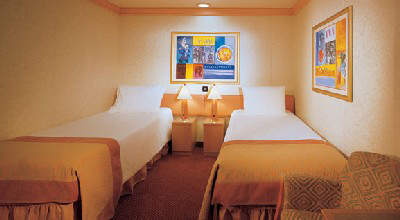 The cabins are luxurious and feature both queen size and twin beds if required. 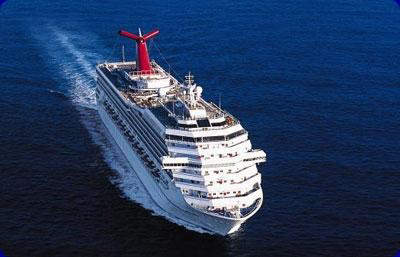 The ship can make 20 knots if required. 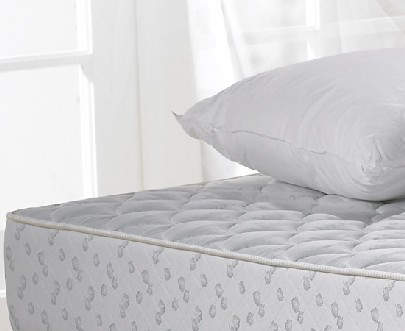 The Carnival cruise line has its own line of luxury bedding.

The Carnival Freedom is the fifth of the Conquest class of Fun Ships designed and constructed for Carnival. The 295m (952ft) long and 116ft wide, 18 deck ship, which has a capacity of 3,734 passengers (2,121 cabins, 1,487 state rooms) and a crew-to-passenger ratio of 1 to 2.6 (total capacity of 4,914 including crew) has a displacement of 110,200t and was constructed by Fincantieri at the Marghera yard in Mestre, Italy.

The revolutionary design of the vessel means that 80% of the staterooms can offer ocean views and of those, 80% have private balconies.

The 64m high ship will have a cruising speed of almost 20 knots and is due to sail for its first cruise in early March 2007 (Grand Mediterranean and Greek Isles). The ship will then operate year-round seven-day Caribbean cruises from the Port of Miami beginning in November 2007.

As is the requirement for all Carnival fun ships, the vessel is equipped with the latest facilities for entertainment and leisure. The ship has the following facilities:

The Carnival Freedom features an interior design theme that will take passengers on a journey through history. From ancient Babylonia to the heyday of disco, from the 19th century Victorian era to the contemporary style of the 1990s, the public rooms of Carnival Freedom celebrate a number of periods in time. The interior was designed by the Carnival architect Joe Farcus who is based in Florida. The Freedom’s Millennium atrium will represent the near-future decade of the 2010s with cylindrical forms painted in iridescent lacquers that take on red or gold tones, and cut-outs of wood veneer that have been dyed to look like tiger skin, lined with polished copper.

“The ship will operate year-round seven-day Caribbean cruises from the Port of Miami.”

Curved railings are done in blue glass, and the theme is carried on to the elevator lobbies where stainless steel elevator doors are decorated with applied copper designs. Glass and copper chandeliers hang from the ceiling amid columns and beams accented with special iridescent glass tiles. Smaller versions of the chandeliers are used as wall lights with colour-changing internal lighting.

The Victoriana show lounge is based on the Victorian era of 1880s London. The room is designed after theatres in the London West End with ornate mouldings, carved marble and gold leaf. The walls adjacent to the stage feature scattered giant curlicues with twinkling lights, and arches between the windows contain pre-Raphaelite paintings. The centrepiece of the theatre is a mural-decorated dome with a crystal chandelier.

The forward and aft restaurants (Chic and Posh Dining Rooms) have the 1990s as a theme. The walls feature a combination of striking polished marbles and a special wood veneer laminated in a fashionable python skin pattern. Marble and antique gold grillwork with fruit, vines and leaves is mounted between the banquettes. The mood of the restaurants can be changed dramatically through innovative colour change lighting strips that create a sparkling effect.

The Sun King Supper Club represents the Louis 14th era of the 18th century. A statue of Louis as the Sun King greets diners as they enter the restaurant and an impressive period chandelier hangs in the skylight dome with smaller versions suspended throughout the room. Other design features of the era include elaborate tapestries, antique mirrors on the walls and a large mural depicting the court of the King in Trompe l’oeil.

The Player’s Sport Bar is adorned with chrome, sports medallions and memorabilia highlighting the 1950s. The bar features a canopy done in lacquer and photographs of famous sports teams from the mid-20th century are displayed around the panelling. There are several 50in plasma screen televisions throughout the bar.

Club 02 is the ship’s teen club with a distinctly contemporary design. Plasma screens throughout the 1,800ft² room serve as kinetic art, with continuously changing posters, paintings and landscapes. In the adjacent games room, LED digital clocks are positioned along the walls and ceiling with the year constantly changing to highlight the first decade of the 21st century.

The Studio 70 dance club focuses on the 1970s disco era. An updated version of the famed Studio 54 disco in New York, Studio 70 has giant ‘70s’ on the walls in coloured stainless steel with interior colour-changing, pulsating lights, while sofas are formed from giant seven and zero shapes with upholstered seats and glass backs. The room’s black interior has the inevitable spinning mirror balls hanging from the ceiling.

“The Carnival Freedom features an interior design theme that will take passengers on a journey through history.”

The Bar Nouveau wine bar is based on the 1890s art nouveau period style with a stained-glass backlit dome and inlaid marble walls and floor, the bar features small tiles curved out into coves along the ceiling made of sandblasted mirror creating an unusual effect.

The Babylon Casino represents the 1,000 BC Babylonian palace of King Hammurabi and is based on the Hanging Gardens of Babylon, one of the Seven Ancient Wonders of the World.

A reproduction of the legendary Ishtar Gate is done in blue-glaze brick with applied mythological animals and decorations of flowers and geometric designs, while brick columns with Babylonian winged figures are found throughout the casino.

The poolside Freedom Restaurant incorporates the modern design style of the 1980s. Various replicas of the Statue of Liberty are incorporated into the restaurant décor.

OTHER ROOM DESIGN AND FACILITIES

Other public rooms onboard include: the 1940s Habana Cigar Bar, with barstools and tabletops resembling cigars; the 1770s in the Monticello Library evocative of the American colonial style; the 1910s in Scott’s piano bar, named after ragtime piano master Scott Joplin; the 1930s in Swing time jazz club, hearkening back to jazz’s early days; and the 900s in the Dynasty Room, an homage to ancient China.

All dining venues will feature ‘Georges Blanc Signature Selections’ created by the French master chef who has maintained three stars from Michelin for more than 25 years.

Carnival has implemented a digital signage solution on the Carnival Freedom in the Casino. There are more than 20 displays in the casino area that feature updated information and content on various shipboard activities. The system runs on RoninCast 2.3 Wireless, which is Ronin Technologies latest application. The RoninCast software uses real-time database integration, and now offers the ability to display real-time progressive jackpot totals and trigger instantaneous system wide winner celebration content when a jackpot has been won.